In October 2005, the Charture Institute staged “The State of Our Community,” a two-day conference presenting the work done through Sustaining Jackson Hole in its first two years.6

The event’s keynote speaker was Yvon Chouinard, a noted mountaineer and the founder of the Patagonia sporting goods company. In his talk, Mr. Chouinard described an effort called One Percent for the Planet, something he had recently launched with Craig Mathews, owner of Blue Ribbon Flies in West Yellowstone, Montana. A marketing organization, members of One Percent for the Planet donate at least one percent of their total sales to environmental organizations around the world.

Shortly after Mr. Chouinard’s talk, Jackson business owner Sean Love and Jonathan Schechter conceieved of the idea of doing a local version of One Percent for the Planet. After receiving Mr. Chouinard’s blessing, in June 2006, the Charture Institute launched 1% for the Tetons.

Since its start in June, 2006, 1% for the Tetons has raised over $250,000 for local sustainability projects, and granted over $246,000 to 19 separate projects. This quarter-million dollars has been matched by over $400,000 in additional monies, and a similar amount in in-kind labor. 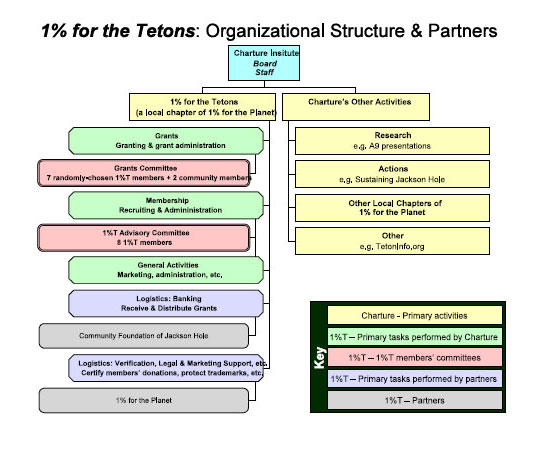